Photo by Greg Farley, winner of the Flat Creek photo contest. Taken last fall in either TNP or YNP.

Last year, the bison was chosen as America’s first national mammal, joining the bald eagle as a symbol of America. I started writing this post with only a mild interest in bison. But the more I learned, the more I want to learn, and this blog post took on a life of it’s own. The bison have a fascinating history, unique appearance, and they present complex challenges in the present day. They are a symbol of the untamed West. Their near-extinction is a testament to the self-centeredness of “civilized” men and their resurgence shows that we can learn from and try to correct our mistakes.

Why did people nearly push the bison to extinction?

To settle the West, early settlers needed to conquer the Native Americans, and the bison were everything to the Natives. The bison provided meat for food and hides for tepees. So the US Army launched a campaign to kill the bison so they could control the Native Americans. Without this sad and complicated part of our history, many of us would not live in the homes we live in today. We live here at the expense of the people and the animals that used to call this home. 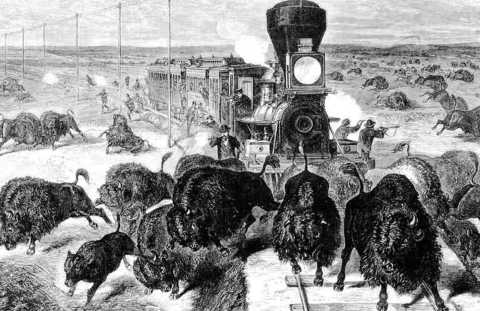 Photo from the 1870s of a pile of American bison skulls waiting to be ground for fertilizer. Wikipedia

A Timeline of the American Bison This map shows the decline of land occupied by bison.

Now that the bison are no longer endangered, why are the Yellowstone bison special?

Yellowstone is the only place in the continental US where wild, free ranging bison have lived continuously since prehistoric times. It is also the largest bison population in the country. And it’s one of the only purebread (no cattle genes) herds left. The other two other locations with purebred buffalo are in Utah and in South Dakota.

Are all of Yellowstone’s bison descended from the 24 in 1884?

No. In 1902 the U.S. Army brought 21 bison from two private herds to Yellowstone. These animals were bred with those already in Yellowstone.

What challenges do the Yellostone bison still have?

Limited space, and disease. When not facing mass destruction by man, bison are actually pretty good at reproducing; most adult females get pregnant every year. But the Park land is finite and inevitably the bison population wants to spread outside the Park. They do leave, since there is no fence around the exterior of the Park, and cattle ranchers in Montana do not want the bison roaming around and spreading disease to the cattle. The current solution to this problem is for Yellowstone to regularly capture about 1,000 bison per year and ship them to Native American tribes where they are slaughtered.

What disease are the cattle ranchers concerned about?

Up to 60% of Yellowstone bison test positive for brucellosis, which ironically, the bison got from cattle in the early 1900s. Brucellosis has been mostly eliminated from cattle across the US, but persists in the Yellowstone ecosystem’s bison and elk.

Do bison breed with cattle?

Yes (heard of beefalo? Cattalo?) but human intervention is required. Even though bison and cattle are different genus (usually animals need to be same genus to have offspring), they are able to breed and produce offspring that, surprisingly, are fertile (unlike some other hybrids like the mule).  The study of hybrids is a whole different subject.

What is the hump of a bison made out of?

Mostly muscle and bone. The spinous processes and associated muscles of the buffalo are much longer than those of similar mammals. The hump is one reason they are able to survive tough winters. It enables them to use their heads as snowplows in the winter so they can find grass. The bison is a great symbol for America for many reasons. For better or for worse, it’s a history of our determination to settle the West. The resurgence of the bison shows that every once in a while, man does something that is not just for himself.

To the many people who know more about bison than I do: I wrote this post based on information found on the national park website, and the fish and game website. If there are untruths or errors let me know!